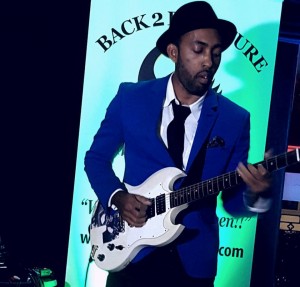 Robert ‘Dubwise’ Browne is undoubtedly one of Jamaica’s most prolific guitarists, whose signature look coupled with a musical style that fuses Jazz with Reggae and Rock has left lasting imprints in studios and on major stages around the world. Influenced by Jimmy Hendrix, Lee Ritenour, and Joe Satriani, Dubz, as he is affectionately known, has carefully mastered his craft while working as a studio session musician, Producer, and touring musician and he has no intention of slowing down.

An initial encounter with Dubz can only be described as coming face to face with a ‘quiet storm’. He’s very reserved but as soon as he touches the stage he transforms into a confident and commanding star – the music takes him over and all that he feels comes out through his fingers and he’s got your attention locked.

According to Dubz, “working with artists like Shaggy, Diana King, & Jimmy Cliff gave me the opportunity to travel the world, doing what I love and to experience different cultures, something most people only dream about.”

No stranger to the recording studio his guitar riffs are featured on Ziggy Marley and the Melody Maker’s album “Free Like We Want 2 Be” (1995), multiple Grammy winner and platinum selling vocalist Lauryn Hill’s “Miseducation” album (1998), a number of Shaggy albums including “Lucky Day (2002), Summer in Kingston ( 2011) and Out of Many One Music (2013 ), Diana King’s AgirLnaMeKING album (2010), Joseph Hill (Culture), and Burning Spear. “After working with other artists for most of my career as a musician and experiencing all there is from this perspective, I felt it was time to sing my own song – share what’s inside me through my own music…” says Dubz.

2004 was the first step towards singing his own song when he released his debut solo album – ROBERT DUBWISE: BIRTH on his Dubz House record label. The album featured famed saxophonist Dean Fraser and veteran guitarist Ernest Ranglin. In 2010 he followed up with his sophomore album, ELECTRIFYING GROOVES OF DiVERSION. Both albums are currently available on iTunes and all major online music platforms.

This need to “sing his own song” – may also have something to do with the fact that he was born into one of Reggae’s Royal families. He is the son of acclaimed Bassist, Glen Browne of Tarrus Riley’s Black Soil Band. His twin brother, bassist Richard “Shams” Browne has produced some of dancehall’s hottest riddims and is the former manager of the dancehall group, TOK.  His uncles – producer Cleveland “Clevie” Browne formerly of The In Crowd was a member of the famed classic dancehall duo Steely and Clevie, Danny Browne formerly of the Bloodfire Posse is the  producer and founder of the Mainstreet Crew and label in the mid-90s and uncle Dalton Browne was influential in launching the Big Ship label with reggae icon Freddie McGregor and still plays guitar in his band today.

Throughout his career Robert “Dubwise” Browne has travelled and performed all across the world. He performed at the prestigious Blue Note Tokyo (Japan), playing the opening set for Shaggy.