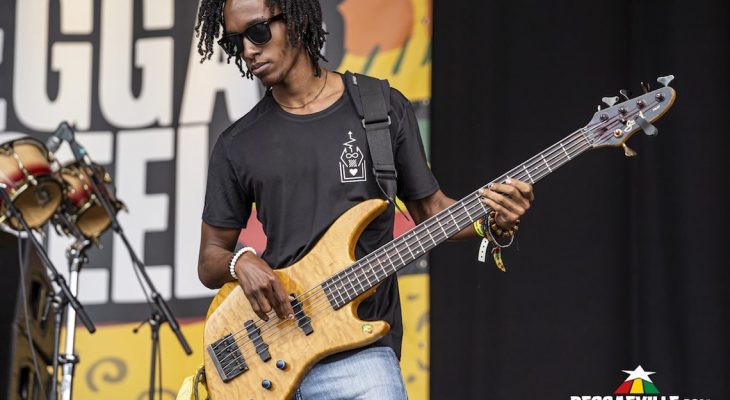 Salim Glenroy Browne born 28 June 1997, is an outstanding bass player who is currently a student of the Edna Manley  School of the performing and Visual Arts.

A founding member of the 6 points band, who started playing at the age of 5 when his father bought him his first bass for his birthday, Browne’s musical talent was recognized when he was only 3 years old; he would sing the bass notes of every song that came on the radio which was fascinating to his dad who was an accomplished musician.

Browne is a third generation bass player who’s skills as a player continues to improve over the years as he shares his talent on stage and in the studio recording for his band 6 points as well as for various artists.

His achievements include a certificate for most outstanding musician in his school band at St Richards Primary as well as a trophy that was awarded for Excellence in music. He was recently awarded the Jah Jerry Scholar Scholarship at Edna Manley School of the performing and Visual Arts for students that are performing above average.

Salim was born to Robert and Desrene Browne in Kingston, Jamaica. He has a younger brother, Myles. His father, Robert, is an accomplished guitarist from  Jamaica’s musical Royal family and his mother a manager of a small company. Browne spent his time dancing and playing music, but took dancing more seriously. As a child, Salim attended St Richard Primary School, where he began showing his outstanding musical potential when he joined the school band Tres Dulce. By the age of ten, Browne had become the school’s most talented bass player, playing at graduations and different functions.

At the beginning of Calabar High School, Browne continued to play with St Richard’s school band, but later had to hand the post over to a new bass player attending the school. Calabar High School, although they have a music room did not place emphasis on a school band and so music was placed on the back burner. The end of high school was approaching very fast with the next step being college, so after several discussions with his parents, he was encouraged to explore his love for the arts and to focus his energy on improving his craft. Edna Manley School of the Performing and Visual Arts had a history of producing successful artists and musicians. After looking at some brochures and doing a tour of the school he was very excited especially when he ran into his very first bass teacher Mr. Maurice Gordon who taught at the college.

While in primary school he performed with his school band Tres Dulce at different events as well as an overseas trip to Barbados where they left a great impression on their audience. The band also did their first backing set for an artist by the name of D-Major at an event that was held in Half Way Tree where he was called to the front of the stage. He performed with his musical director Mr. Sean Rhoden for the Tres Dulces Band at his school graduation where he was well received.

His first performance while in college was during their weekly lunch hour show. He then found himself playing with other students who were a year or two ahead of him during their lunch hour and end of year showcases, where he never failed to do an outstanding job. Mr. Michael Fletcher who served as one of his bass teachers identified the potential in Browne and a few other students and invited them to come together and start a band which they decided to call 6 Points. Browne believes that there is always room for growth and improvement, and so he never feels like he is at his best especially coming from a musical family where everyone thinks he should take that aspect of his art  more seriously which he does his best to do.

Being at Edna Manley has been a very rewarding and educational experience that he would not trade for anything, learning from professors such as Mr. Maurice Gordon, Mr. Dwayne Livingston and Mr. William Egglington Jr. Playing and growing with his fellow class mates, exchanging ideas and experimenting.

At the age of 21 Browne has had the privilege of playing with artists such as Richie Stephens, Warrior King, Kelissa, Thunderground formally known as Roots Underground  gracing the stage more than once playing alongside one of the people he admires the most, his dad.

Music has taken him to different parishes in Jamaica as well as different countries. With many more prospects ahead Browne’s goal is to tour the world while working to produce group and solo projects for his albums. His first single entitled “Vibe With Me” was released in 2017 on all digital platforms (itunes, Spotify and Amazon).