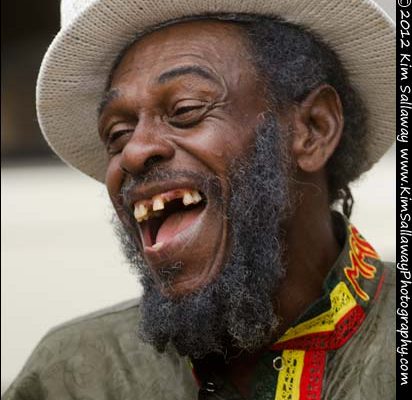 Born Keith Blake in St. Elizabeth, and raised in Denham Town, Kingston, Jamaica, Prince Alla’s career began in the vocal group The Leaders with Milton Henry and Roy Palmer, who recorded three tracks for producer Joe Gibbs in the late 1960s. When The Leaders broke up, Blake continued to work with Gibbs, who issued his debut solo release, “Woo Oh Oh”. Blake had been interested in the Rastafari movement since he had a vision as a child, and in 1969, Blake’s Rastafarian faith saw him get heavily involved in Jamaica’s camp community, withdrawing from the music scene and living in Prince Emmanuel Edwards’ camp at Bull Bay. He re-entered the music scene in the mid-1970s, releasing a single “Born a Fighter” for producer Teddy Powell, before working with Bertram Brown’s Freedom Sounds, with a series of recordings, now under the name Prince Alla, that are now regarded as roots reggae classics, such as “Sun Is Shining”, “Bucket Bottom”, “Lot’s Wife”, and “Stone”. He also recorded for Artist/producer Tapper Zukie, including the album Heaven Is My Roof. Continuing interest in his work saw the release of two albums of material from the 1970s on Blood & Fire records, Only Love Can Conquer and I Can Hear The Children Singing, which brought his work to a new audience. Alla continued to release records occasionally through the 1980s and 1990s, including an album with Jah Shaka. Alla has continued to be in demand with digital roots producers, and has released several albums with the likes of Jah Warrior.