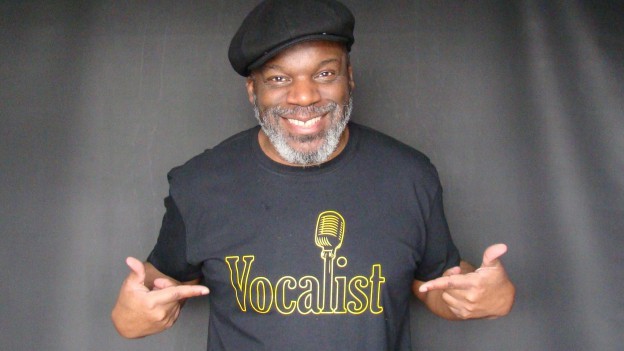 b. 23 March 1964, London, England. Brown’s musical career began in his teens when he teamed up with the UK-based Jah Marcus Hi Power sound system. He performed as a DJ although his days as an MC were short-lived following a sojourn to Jamaica where he stayed for eight months. During his stay he was inspired to perform as a singer after viewing a Jamaican television show Where It’s At that featured Dennis Brown and Big Youth. On his return to London the singer nurtured his vocal skills when he joined the local band Sweet Distortion. In 1984, they were nominated as Newcomers Of The Year and provided backing to artists such as Gregory Isaacs and Aswad. Sweet Distortion released a couple of esoteric singles although they found greater success when they were recruited to play the part of the Jackson Five in the critically acclaimed, Black Heroes In The Hall Of Fame. Following Sweet Distortion’s stage success the band dissolved which led Brown to embark on a solo career. As a soloist the producers of Black Heroes In The Hall Of Fame coaxed him back to undertake the role of Otis Redding. While performing as the soul legend he was able to demonstrate his vocal skills globally with performances in the USA, the Caribbean and on the European continent. In 1990, Brown returned to the UK where he recorded his first number 1 reggae hit. The song was a version of Dr. Hook’s ‘Sharing The Night Together’, which was followed by his second chart-topper, ‘Love You Down’. His success led to a Best Single Of The Year award, which enhanced the singer’s status. He maintained a high profile in the UK reggae industry and in 1995 Brown worked in session with Tippa Irie. The duo recorded ‘It’s A Love Thing’ and ‘Stress’, that led to a recording contract with Arista Records. The label released the controversial ‘Baby Mother’, although like so many major contracts in reggae the release flopped. Following the disappointment Brown took a two-year sabbatical before being persuaded by Lloyd ‘Musclehead’ Francis to work on sessions for his second Album release, a ground-breaking double album set entitled 'Rhyme And Reason'. The album proved a commercial success and led to critical acclaim. Brown then began recording with Danny Ray at Cave Studios where he recorded reggae versions of pop standards such as the Lighthouse Family’s ‘Lifted’ and Santana’s ‘Maria Maria’. These songs were featured on the compilation series, Pop Hits Inna Reggae Style. Brown’s biggest success was a version of Craig David’s ‘Fill Me In’. In 2001, Brown began working with Bitty McClean on sessions that culminated in the Album, 'Deep'. After watching Bitty as a producer, a Monster was unleashed in the shape of Lloyd Brown the Producer - the rest as they say... Well not quite, as the story is still being written with Lloyd on Album 21 - The 'Vocalist' as at November 2017 and two other artist albums produced for Lyn Gerald and Shade Aman
with another featuring Fiona Robinson on the way.