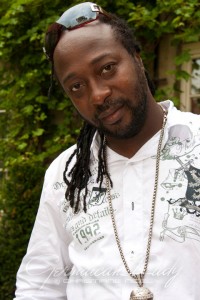 Flourgon possesses a voice which features a leonine growl emerging from a deep brown tone which has made him one of the most distinctive dancehall acts with an instantly recognisable calling card. The Kingstonian born as Michael May initially fed his dancehall jones around the set on his own sound, Sweet Love, as well as sounds such as Stone Love, Small Axe and Rambo Mango. His first forays into the studio were in accompaniment of his brother, Red Dragon, where his backing vocals featured on some of his hits, including the international smash Hol’ A Fresh. Whilst running Sweet Love, Flourgon and Dragon made the acquaintance of a young Mark Myrie and are credited with mentoring the youngster who later made a name for himself as Buju Banton; the brothers similarly played a role in nurturing the young Terry Ganzie. Flourgon claims that he feels coaching and schooling young artistes is a crucial component of his legacy and cites the encouragement and advice he received from veteran MC Charlie Chaplin as the motivation for his magnanimity.

Flourgon is a foundation MC, whose flow at the heart of hits such as ‘Bounce’, ‘We Run Tings’, ‘One Foot Skank’,’Zig It Up’ and ‘Talk ‘Bout Gun’ probably influenced a host of performers. Furthermore, he is much sought after as a tag team partner, following a host of collaborations on major Jamaica chart hits with NinjaMan, Clement Irie, Thriller U and Brian & Tony Gold, but most particularly childhood friend Sanchez. Indeed, Sanchez is a key member of an ad hoc and occasional crew comprising Flourgon, Red Dragon and Daddy Lizard. Some claim that Flourgon’s style is timeless, while others cite the period where he collaborated with Mikey Bennett and Patrick Lindsay on production as his golden age. However, as has been demonstrated time and again, foundation MCs have a way of  re-emerging and returning to the spotlight long after many believed they may have heard the last of them – best to not bet against a Flourgon revival unless you have cash you can afford to lose as his noughties releases ‘Food For The Poor and ‘Can’t Live Without You’ can testify to.

In 2017 Flourgon hit the Newsstands again as he found himself embroiled in a lawsuit against pop starlet, Miley Cyrus. The pop star had released a single – ‘We Can’t Stop’ which featured the line ‘We Run Things, Things Don’t Run We’ which Flour charged infringed his 1988 hit ‘We Run Tings’. We Run Tings had earlier been covered by his Brother, Red Dragon, for inclusion on the Feature Film ‘Third World Cop’. As at Autumn 2018 the case was still in court.