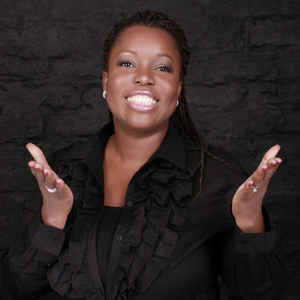 Chevelle Franklyn has emerged on the gospel music scene as one of the most outstanding Ministers of Music over the past nine years. Her insight as a songwriter/producer, vocal capacity as a singer, and her anointing as a worshiper has ensured her success as a leading, international, multiple award-winning Psalmist.

As a child prodigy in the industry, Chevelle recorded her first single – “Here I Am” produced by Rohan Harrison –and it was released in her early teens. Public reaction to its debut was incredibly positive and indicated that Chevelle had a future in the industry.

Nurtured by some of the top names among Jamaica’s music producers, Chevelle soon marked out a distinctive territory in Jamaica’s dancehall culture scene. Her future took a rosy turn when she began working with producers Mikey Bennett and Rohan Harrison. She recorded her smash hit “Nice and Naughty”, followed by another single, “No Pushover” in 1992…, again produced by Mikey Bennett.
This led to collaborations with household names such as Shabba Ranks “Mr. Lover Man” in 1991. In 1997, Chevelle hit a lucrative opportunity to record the internationally acclaimed “Dancehall Queen” with Beenie Man, for Island Records of which the soundtrack was used for the equally successful movie of the same name.

Chevelle was now a household name in Jamaica, the UK, the Caribbean and America. During 1996 and 1997, she toured the major cities of these countries, performing at venues such as New York Apollo and Reggae Sumfest Jamaica.

But despite the great success, there remained a gaping hole in her soul. In 1998, during a concert, Chevelle, tired of the empty way of life and hopelessness, suddenly declared on stage a change of direction in her career and lifestyle – she decided to become a Christian. As a symbol of her signature to this new change, she sang Kirk Franklin’s song, “Silver and Gold” on stage. She said, “I did not hear a message or anything, but I felt the calling of God. I just broke down on the stage and said, ‘I can’t do this anymore.’ I knew there was something better out there.” Chevelle gave her life to the Lord ending all her secular contractual agreements, walking away from international hit song “Dancehall Queen.”

Better certainly did come and since that change Chevelle has been combining her new expression with the energetic lyrical style that had made her a great success. A collaboration with Papa San, in 2000, on his award-winning album, Victory, led to a Marlin Award for her vocal appearance on the track Touch from you. She wrote the first page in the history of her new lifestyle with her first gospel album, “Joy”- a co-production effort with Danny Brownie, for Mainstreet Records. The album stirred up an international storm when it was released in 2001, and led to a tour around the UK, the Caribbean and the USA.
One of her aims in its recording, Joy, was to deal with real issues facing young people. She said, “Songs like ‘It’s Another Saturday Night,’ deal with real issues for young Christian people. It’s a real struggle – sometimes your friends are out partying and you feel left out, so this is what the song is dealing with.”

Chevelle’s Spiritual covering is Bishop John Francis of Ruach Ministries, London and her spiritual mother is Pastor Enid Stewart. She has seen God use the ministry to empower and equipped her for Music Ministry.

In 2004, Chevelle ministered at The International Gathering of Champions’ 04, hosted by Pastor Matthew Ashimolowo, Senior Pastor, Kingsway International Christian Centre – London. She shared the platform with, Dr Ron Kenoly, and the KICC Mass Choir along with prominent speakers such as Bishop Eddie Long, Bishop T. D. Jakes, Bishop David Oyedepo, Dr. Mike Murdock, Bishop David Oyedepo, Pastor Robb,Thompson, Bishop Keith Butler, Dr Mensah Otabil, Prophetess Juanita Bynum, and Dr. Morris Cerullo… “Chevelle Franklyn has ministered several times at KICC. Her testimony is inspiring, and her humility is refreshing. We keep inviting her back because her exuberance and love for the Lord overflow as she ministers – for this reason she is always welcome at KICC.”
In 2004, Chevelle also ministered at the Festival of Life ‘A Double Portion’, which was night of prayer, worship and inspirational teachings @ the Excel Docklands London, attracting over 15,000 people. The Conference was hosted by Pastor E.A Adeboye from Nigeria with other ministries from Vinesong and The Festival of Life Mass Choir.

In 2005, and with much excitement, God continued to take the ministry into new territories, like Austria, Germany, Holland, and Kenya. During her tours, Chevelle has shared the stage with renowned gospel legends like, Pastor Donnie McClurkin, Kirk Franklin, Kurt Carr, Stephen Hurd, Israel Haughton, Martha Munizzi and Michael W. Smith to name a few.

Late 2007 Chevelle kicked off touring in South Africa and producing a 13 Track album called ‘Shake It Off’ featuring South Africans’ leading Worship leaders and Music Ministers. The album, with much enthusiasm, is due for a May 2009 Release. She also ministered at the Rhema Bible Church, Johannesburg, earlier 2007 saw Chevelle minister at Dr. Morris Cerullo’s, Partners School of Ministry in Washington D.C., Labour Day event.

2008 Saw Chevelle collaborating with GRAMMY®, Stellar and Dove Award-winning Israel Houghton on a Reggae track called ‘Surley Goodness’ featured on his album ’The Power Of One’ and Chevelle also preformed at The Experience, Lagos Nigeria…. she was the only minister representing the Caribbean at the largest Gospel concert in the world attracting 400,000 people
‘The Experience will be remembered for the rest of my life i was deeply humbled that the Lord opened a door a great and effective one like this to be shared with so many other International ministers but more than anything else the people of Nigeria showed me that they are true worshipers and I was so glad that i saw another level when the rain came God showed up and showed off, I was at the right place at the right time.

Chevelle is now in the studio finishing up the final touches to her new project Set Apart due for a 2010 Release….. “I am so excited about this project, God has opened Nations to me, so therefore he has deposited a sound for the nations and this is an expression of my journey thus far.”