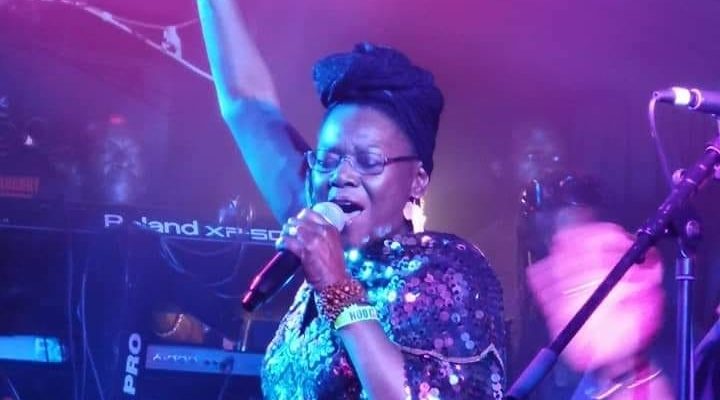 Born in Birmingham to Jamaican parents, Audrey Scott’s initial forays into Music came as a member of her local church and school choirs as well as singing along to the hits of the day by the likes of Millie Small. Her elder brother, Jimmy Stratdan, was also a major influence as he scored hits whilst working with Junior English.

After finishing School in London where the family had moved to, a college friend, Janette Edwards, introduced her to the keyboard player Noel ‘Fish’ Salmon, who in turn brought in his friend Lloyd for rehearsals resulting in the formation of a group called The Sadonians. Fish was tasked with penning the songs whilst the ladies were to alternate lead vocals. To this end, Janette took lead on their 1977 debut,  ‘The Day Will Come’ whilst Audrey took over for single number two – ‘Goodbye My Love’. ‘Goodbye…..’ Engineered by Dennis Bovell and produced by Neville King would become the group and Audrey’s defining hit and a bona fide Lovers Rock Classic.

Unfortunately, Janette fell ill and was briefly replaced by another vocalist but by 1980 the Sadonians had disbanded. Through the 90’s Audrey pursued a solo career with intermittent stints with bands like the Riddim Squad and Reggae Vibes. It was around this time that Audrey recorded her solo debut album, ‘Step by Step’, for Producer Jah Larry. Recorded for Prestige Records her labelmates, The Heptones, provided Backing Vocals.

In 1998 Audrey was persuaded by another friend (Georgette Wilson), to start performing again as a solo Lovers Rock Singer, Georgette put Audrey on the bill  @ London’s famed York Hall with Louisa Marks, Jean Binta Breeze, Felicity Ethnic and many more for The Windrush 50th Anniversary celebration. She would then become a mainstay on The Lovers Rock circuit performing at venues like The O2 London, Jazz Café, The Ocean, Hackney Empire, The Tower Ballroom in Birmingham, Festival Hall Croydon, Hammersmith Apollo, Manchester, Bradford and many more.

In the noughties Audrey continued to record sporadically with producers like Starkey Banton, Fish and others eventually winding up at Nereus Joseph’s Studio in East London.