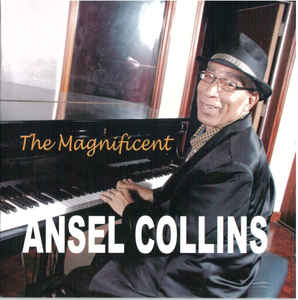 Ansel Collins (sometimes spelled Ansell, Ansil or even Ancel) is one half of the legendary duo, Dave and Ansel Collins along with Dave Barker who entered the history books as the first all-male duo to top the British National (Pop) Charts with 'Double Barrel'. The unprecedented success of that proto-Deejay recording saw Dave & Ansel being the Sean Paul of their day! Originally created as an instrumental recording, Ansel gave the track to then up and coming producer, Winston Riley, who in turn recorded Dave Barker on the track with his American influenced toasting and the rest as they say.... is history. The success of the track however almost threatened to overshadow the importance of Collins as a musical force. Collins' unique keyboard playing exemplified the Skinhead reggae style of the 1970's. This celebrated keyboardist, producer, and occasional singer was born in 1949 in Kingston, Jamaica. He has worked alongside some of the most iconic figures in the reggae world including Lee 'Scratch' Perry and Jimmy Cliff. As a keyboard player and pianist there are few musicians who have performed on more recordings than Collins. In the 1970’s when Jamaican music was celebrating its heyday on the global music stage Collins could be found as a member of every session band for the most prolific producers of the time, including the Aggravators (Bunny Lee), Upsetters (Lee Perry), The Professionals (Joe Gibbs), Revolutionaries (Channel One recordings) GG Allstars (Alvin Ranglin) and the Techniques All Stars (Winston Riley). As a musician, Collins also released a number of solo records including "Cock Robin", "Atlantic One" and "Nuclear Weapon". Jamaica has been blessed with many talented musicians who have made an indelible contribution to the development of music worldwide. Keyboardist Ansel Collins, is one such musician who should be lauded by generations to come though unfortunately his work is sadly often overlooked. In 2015 he took matters in his own hands with the help of Back 2 Da Future's Kennedy Mensah to record an album called 'The Magnificent'. This set was a Jazz Reggae outing showcasing a snapshot of the hits that Ansel had contributed to. Included in the set are instrumental reworked versions of hits by the likes of The Mighty Diamonds, Gregory Isaacs, Marcia Griffiths and Black Uhuru - all of which Ansel's signature keys graced the first time around. During the subsequent 2015 Promotional Tour of the UK, alongside Robert Dubwise Browne - One Radio Presenter renamed Ansel - Mr Platinum Fingers. Two years later this description started to manifest itself as one of his seminal recordings, Stalag 17 for the aforementioned Winston Riley received a lot of attention when sampled by Jay Z for a collaboration with Damian 'Junior Gong' Marley on his '444' set. Thus crowning Ansel Collins as one of the most sampled musicians of all time as that recording had previously been sampled by the likes of Lauren Hill, Beyonce, Kanye West, Sade and a whole host of other pop luminaries.