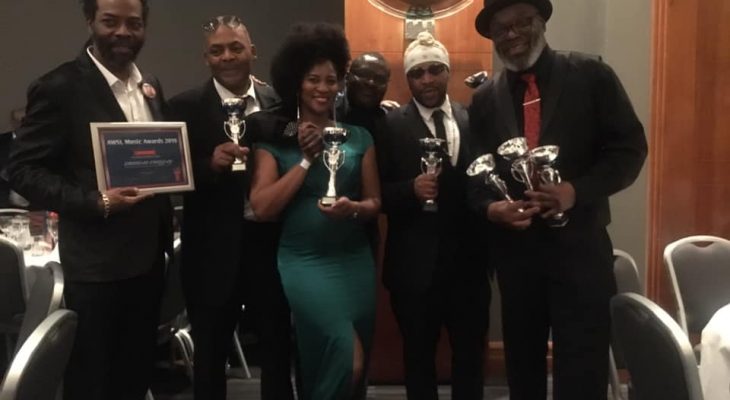 Our Back 2 Da Future table is decorated by so many trophies that people are looking around wondering if we must be sponsors – James shoe care – who are supplying the trophies for tonight’s event.

But no,  we Are Back 2 Da Future music Ltd – a music publishing company.

It’s the second staging of the AWSL awards – the rebirth of the Reggae awards in the UK. Literally reconstituted by Ingrid ‘Lady TLC’ Singh to stand on the shoulders of Tony Williams’ British Reggae Industry Awards. In the 1980’s and 90’s Tony Williams’ Awards were THE  highlight of the UK Reggae calendar. Any Reggae practitioner of the era probably owes their Trophy haul’s existence to Tony Williams – not to mention the source of much of their Airplay. So it was only right that Tony Williams be  recognised at tonight’s event with a Special Award. The zenith of those Awards was arguably in 1992 when it was staged at the world famous Royal Albert Hall. Tonight, the prestige has been added to with a Dinner & Dance element in the uptown locale that the Bloomsbury Holiday Inn is situated.

After the Champagne reception we enter the Main Hall to scan for our table for Dinner. Station FM, Chaaawaa Radio, Slam Radio, UK Pressure Records – you know EXACTLY what those table entities are – EVEN if you’ve never listened – But Back 2 Da Future Music now – “What is THAT?” I can hear people asking.

I’m reminded  of the days of Blackberry Messenger – you know how you do? –  You create a broadcast list and you send out broadcasts to all of your your contacts???? So I send out a broadcast and get this one message back  “”who are you”?

I respond: “With the exception of the major record companies how many music publishers have you heard of?”

That’s the point EXACTLY!!!!! – you may not have ever heard of us because we are always behind the scenes – collecting Royalties and supporting our writers. So here we are surveying our clientele and Awards haul in-the-hall as it were. Seated opposite me on the oversubscribed table is Donovan Kingjay, with his Runner-Up Best Male artist certificate following on from last year’s winners medal. Chardel Rhoden is sat to my left beaming with her Best female Trophy resplendent in Afro and evergreen attire. Deejay/producer Babyboom, is also beaming at his Best Video Trophy won in tandem with Lloyd Brown for their collaboration ‘You’re Goin’ Down’. Speaking of Lloyd, he’s braved a chest infection to be here tonight – but booooy was it worth it!!!! What with 3 of a possible four Trophies he is the proverbial cat that got the cream. As a Tottenham supporter he’s not used to lifting trophies (had to get that one in!!!) so we have to ‘llow him this glory. Best Female nominee, Lady Lex is on the Chaawaa table to our right, Gary Digitec is hosting two tables across with Chucky Bantan recipient of the Best Male AND Best Album Awards. We have literally just swept the Awards like a Bogle dance move!!!!

Most people will know EXACTLY what a radio station is or what a record company is but many are left wondering who are those noisy guys winning ALL them trophies. Weeeelllll – apart from the major Record label’s publishing houses you’ve probably never heard of any other publishing company but now you’ve heard of Us